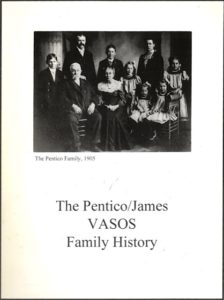 My father died in 1981. It was eight years before I opened the box my mother gave me after his funeral – a box with  notes from a family history project he’d been working on a few years before his death. I’d heard about Dad’s project and how each day armed with magnifying glass, notebooks, paper and pen he planted himself at the local library to pour over microfilm of old newspapers. At the County Clerk’s office he took notes on the vital statistics for family members he was researching.  I wondered what had gotten into him

My  only references to Dad’s new found  interest in  family history were Dad telling us kids we were related to the infamous outlaw, Jesse James and that his mother, Myrtle James was born in Kellogg, Iowa close to our hometown of Carroll.

Myrtle died before my five siblings and I  were born but I’d developed a fascination with  her when my mother told me Myrtle had seen an image of Jesus at the foot of her bed when she was sick and bedridden.  That made her about as  famous and interesting  to me as Jesse James. As a young girl I tried to make contact with her from the  upstairs clothes closet where I knew I’d have some privacy. I’d close the  door, step in among all the clothes  and say “ Myrtle, Myrtle you don’t know me but I’m your granddaughter, Judy.” When I felt something brush my shoulder I had a strong sense she heard me. I was too afraid to continue and would bolt out of the closet only to do this time and time again.

The first thing I pulled out of Dad’s box  was a black notebook. On page one he had printed the name JACOB PENTICO in firm, precise black capital letters. I’d never heard of this man and wasn’t at all interested until I noticed  the name Myrtle James a few lines down.

What did Myrtle have to do with Jacob Pentico? How and where had Dad discovered Jacob’s name and written it down for someone to discover? The mystery of it made my head swirl and I began the long journey that took me to Pierce, Nebraska where Jacob is buried and Pentico descendants live.The internet was not yet the indispensable research  tool it is today. I began in the old fashion way by calling the telephone operator for Nebraska and getting as much information as I could about anyone named Pentico. There were many  and I wrote each one a letter. To my great surprise, many responded, confirmed we were related and encouraged me to visit Pierce and stay with them.

Knowing there were living relatives turned Dad’s box of notes and photos into a treasure chest. By the time I visited Pierce I had a photo of Jacob,  knew he was Myrtle’s grandfather, was in the Civil War, had lived in Kellogg and  Carroll before moving to Nebraska where he farmed 160 acres under the 1862 Homestead Act.  At trip’s end I had enough material to fill a book, The Pentico James Vasos Family History, now listed with World Cat, the Iowa Historical Society and Nebraska Historical Society. I know Dad would be happy to know someone discovered his notes and added to the story. 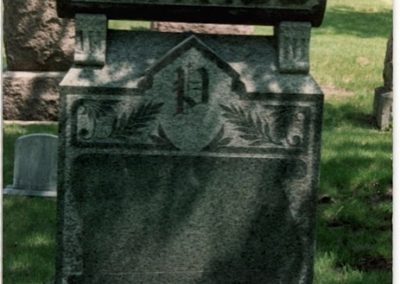